To "spin a yarn" is not just to tell a story but to construct a tale. Storytelling as an art form brings together the teller and audience to push and pull a narrative into being. The tellers initiate the act, providing a fertile soil to conjure visual and rhetorical play. Storytellers and audiences are dependent on one another, co-conspirators in sketching plot, character, place, conversation and event.

While structure and ending might exist, the role of teller as creative instigator is to tease at meaning rather than to describe or depict to the point of weighing down the audience with a definitive interpretation. With this open structure, individuals in an audience cannot be passive in receiving the story  rather they must fill in where fractures and gaps are provided. In many cultures stories are used to impart wisdom, share beliefs and values, spark creativity, and create bonds. Often in the retelling of events, the mythic and the fact become intertwined, and this newly formed memory overshadows and replaces the actuality of what occurred.

The Spinning Yarns artists, as tellers, impart their tales using photography as a vehicle. The nature of photography as a seemingly factual representation of what exists in a specific time and space informs how we structure and remember events. Since the advent of photography, artists have fabricated photographs, creating imagery through collage, photomontage and theatrical representations and illustrating existing stories: allegories, mythologies, and fables. In today's contexts, contemporary photographic artists are telling stories differently by using open-ended narratives, visual metaphor and subtle manipulation of subjects and situations. Viewers are already practiced with the idea of inserting their own knowledge and experiences, as well as using creativity and imagination to augment an oral or written tale. The efficiency of an image is ideal in its ability to convey an open narrative, drawing in the audience by presenting more questions than answers. Filling in information, reading between the lines, is what makes an audience able to make the transition to the visual form of storytelling and the use of open narrative. They readily apply the same techniques when presented with a visual narrative.

As curators of Spinning Yarns we identified some significant traits about storytelling and storytellers. From setting the stage to character development, from prose to poetry, each of the artists in this exhibition utilizes aspects of storytelling and open narrative to send their viewers down a creative path. As artists they seem to work with a quiet urgency, a tale that must be told, a calm where a storm seems to be brooding right under the surface. They balance the playful with the serious, beauty with peculiarity. Each artist imparts to the viewer their experiences, their wisdom and imagination, their beliefs and memories, creating images that are provocative because they present a "beginning" through place, mood, or character. The physical act of creation is the starting point for artists Christine Shank, Grace Weston, Blue Mitchell, Erin V. Sotak and Jason DeMarte. They fabricate an environment drawn from their imagination, controlling all aspects of their visual lexicon. For these artists, it is not enough to take from the world as it is, rather they are compelled to create from what exists in their minds and to encourage the building of anticipation in their viewers by layers of visual information.

By introducing characters, Morgan Konn, Ashley Feagin, Darren Harvey-Regan and Andy Bloxham provide a relatable or sympathetic entity for viewer's identification, concern, or inquiry. The characters created are defined just enough to be three-dimensional while leaving plenty of room for each viewer to round them out by way of connecting personal experience and relationships.

The stories told by Joy Christiansen Erb, Ruth Zelanski, Muireann Brady, and Priya Kambli are based in fact, taking from personal experience and building on cultural significance. While metaphor may be present, they speak directly to their viewers. Their stories are at times uncomfortably truthful and visually difficult in their telling and yet compassionate and filled with an empathy that is infectious. While some of these artists are interested in presenting a tale cemented in fact, showing us the way things are; others choose to manipulate the truth creating stories based on fragments of experience.

Artists Alex Emmons, Jay Gould, Bess Bieluczyk, Carol Golemboski, Christopher Jordan and Rachel Girard Reisert work between what is and what may be, between memory and actuality, fact and fabrication, representation and embellishment. The magic of storytelling is that the story becomes whatever you want it to become. They create visual poetry that alludes to experiences, has an emotive quality and communicates through the open narrative.

While many of these artists create a visual language through their images, Nate Larson and Marni Shindelman employ an existing visual language to communicate with viewers who most likely do not possess certain kinds of information. The viewer knows they are being addressed, but without the key, they cannot be sure of the message and they are left to surmise the inference.

All of the artists in Spinning Yarns go one step further in their employment of language by adding titles for series or the individual images. In doing so they lay a path to the clues of their intended translation from mind or word into imagery. The text helps to bridge the gap between a narrative that is solely in the artist's mind and one presented in the photographic image. These artists successfully lure the viewers in through the imagery and keep them there with the potential for interpretation, and lingering on these photographs, the viewer may interpret a myriad of connotative meanings. The dialogue between artists and viewers creates new perspectives, biases, and experiences, while further "spinning the yarn". 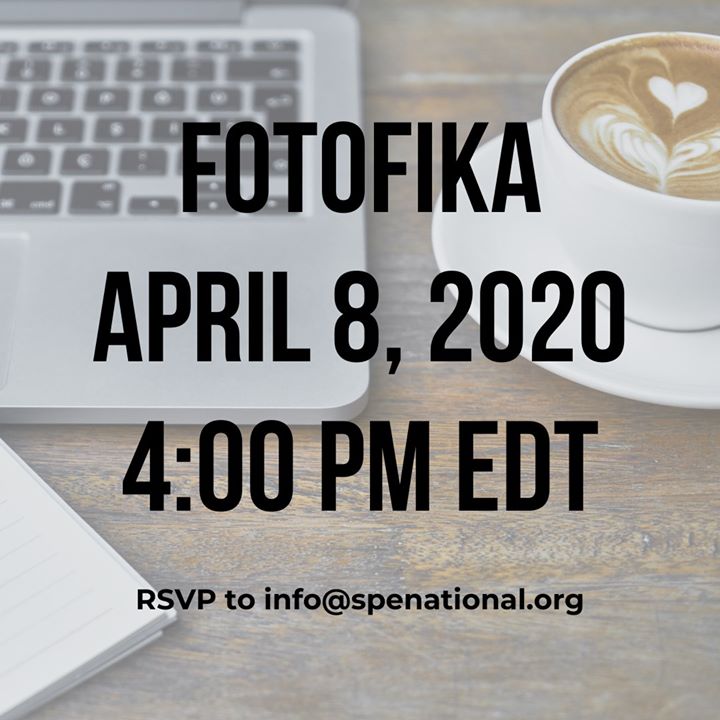 SPE is happy to host the 4th weekly FotoFika on Wednesday, April 8th at 4:00 pm EDT. This week, we will be sharing part two in a series on transitioning thesis exhibitions online. We will continue with the same format, 20 minutes of ideas (including answering some of the questions we had from the first meeting). And then 40 minutes of time will be dedicated to your questions and solutions. We look forward to seeing you on Zoom: https://zoom.us/j/490410314 If you plan on attending the meeting on April 8th, 4pm EDT please RSVP to info@spenational.org

SPE is happy to host the 4th weekly FotoFika on Wednesday, April 8th at 4:00 pm EDT. This week, we will be sharing part two in a series on transitioning thesis exhibitions online. We will continue with the same format, 20 minutes of ideas (including answering some of the questions...