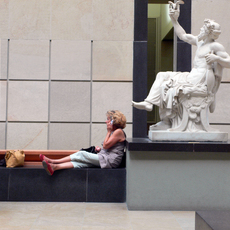 Growing up in a tiny tract house in the 1950's, the path to the American dream was clearly marked. Everyone could have the life they desired if they went to school, became more educated than their parents, and found a good job. We stared with envy at the new tract of larger homes being built just a little farther from the city center and we vowed to live there some day. It would be our little piece of paradise, complete with a shiny new car in the garage.

A half-century later, the model of the American dream has proven to be unattainable not only for many Americans, but also for billions of people who, quite understandably, seek a better life in developing economies. Places that could be seen as paradise for their natural beauty and wealth of resources are overwhelmed by our attempt to live there. One of the great paradoxes of modern life is that our desire to reside in paradise destroys the very thing we aspire to.

In my work over the past 20 years I have searched for paradise and, in most cases, found the opposite. Walking along the edge of the San Francisco Bay, a place that once was shimmering in beauty, one will find mammoth towers for high voltage power lines. Beneath those towers you will encounter signs for the Menlo Park National Wildlife Refuge. In the name of environmental protection we relegate the waterfowl to a now uninhabitable and ruined strip of land. On the other hand, as night falls, lovely houses on the hills of the city sparkle with light powered by the wires of Pacific Gas and Electric.

I don't pretend to have the answers to the paradise paradox. With the photographs and essays in my book, Paradise/Paradox, I have attempted to pose some questions about the way we live, our follies, environmental justice, our difficult relationship with the earth, and the search for paradise.