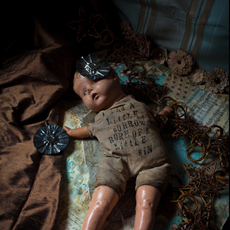 REMAINS focuses on what remains 'that' which is left in the wake of death: words, darkness, anger, guilt, artifacts, letters never to be sent, pain, grief, and more words.

Photography has a history of being linked to the recording of memory and also loss. The photographic image is a visual memory both real and fabricated in its design. In documentation, the act of death or loss is portrayed as either romantic or brutally Gothic in appearance. In REMAINS, I strive to combine an element of both, depicting how one artist interprets, preserves, and accepts the finality of loss.

REMAINS: The Clothes They Gave Me When You Died I

REMAINS: The Clothes They Gave Me When You Died II

REMAINS: In the End, All is Memory, Bone & Myth