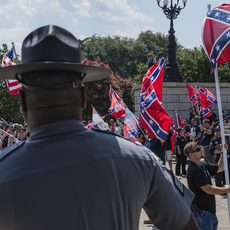 Witness Tree VisionsnnI am a photographer/ digital montage artist who addresses the African Diaspora with an emphasis on the black experience within American history. The montages are the result of on-site photographic recording, access to period documents and artifacts, and references to the passage of time and contemporary culture. I am intrigued with how history is layered, as I discover the paths that individual lives took and the webs of interconnections across distance and generations. Recent investigations include tracing connections to Arizona and California. Two of these biographical studies focus on Colonel Charles Young (born into slavery, who became the 3rd black man to graduate from West Point and as a career Buffalo Soldier), and the family of William Sugg (a black gold miner who was brought to California as a slave in 1850, who later gained his freedom and raised a family in Sonora).____________________________Digital Montage Content Descriptions_________________________________________-1) Sugg House_The home of William and Mary Sugg, a black gold miner who was brought to California in 1850 as a slave, who purchased his freedom for one dollar in 1854. Originally a one-story three-room adobe structure, the house was expanded to a three-story structure as the family grew. All eleven of their children were born in the main room of the house. This montage features the only know photograph of William Sugg, gold nuggets, a portion of his manumission paper from the Tuolumne County records, and placed in intersection is the volume where that document is contained. (2011) __2) Sugg House/Upstairs-There are numbers on the doors of the 2nd floor of the Sugg House, because it was stately enough to serve as a boarding house that handled the overflow from the local hotel. The photographs show William's son Alonzo, and a "Class of 1924" group portrait with grandson Vernon. (2011)__3) Sugg House/Babe-William Sugg's daughter, Melpomene (Babe) is featured in this montage in a solo portrait and standing on the side porch of the house with her friend Jessie Mallard. Pictured on the table are photographs of His son Ernest, wife Mary Elizabeth with grandsons Vernon and Earl, and the "Class of 1924" including Vernon. (2011)__4) Young House-Colonel Charles Young and his wife, Ada are shown on the porch of their home in Ohio near Wilberforce University where he taught Military Science. Featured in this montage is a large-scale detailed map of Liberia that he drew, a 1914 note that he sent back from Liberia, and one of his uniforms that is housed in the Ohio Historical Society. Young was one of the three African Americans who graduated from West Point in the 19th century, military attaché to Haiti and Liberia, and served as a career Buffalo Soldier in several locations including Fort Huachuca in southern Arizona and the Presidio in San Francisco, CA. When he died in 1922, he was the highest-ranking African American in the Regular Army. (2012)__5) Charles Young/Sequoia National Park (CA) - This montage includes: text from Memories by Philip Winser (c. 1930), picnic invitation celebrating the opening of Giant Forest Road (1903), a photograph showing the construction crew upon completion of the road into the Giant Forest (all courtesy of the Sequoia National Park Archive), and a portrait of Charles Young (courtesy of the archive at The National Afro-American Museum and Cultural Center). The combined locations feature the split road passing through "The Four Horsemen" and the Colonel Charles Young Memorial Tree. (2012)