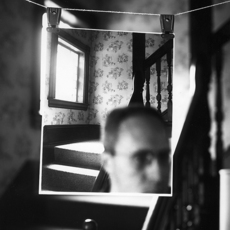 For many years I have been working with pictures that I re-photograph in some fashion or another, suggesting a form of meta-photography, or tautology. I use this duplicative tactic as a way of exploring the inherent tension that exists within photography-provided by its capacity to both depict and deceive, concurrently.

In the work called Photographic Prevarications, space, planes, and objects are presented in such a way as to underscore photography's ability to tell untruths. In this way, I want to urge the viewer to question the nature of photography itself-by making them aware that they are looking at, and perceiving, a photograph, not looking at the subject matter of the photograph.

This work began as a small series made in the corner of a gallery (see Corners). Here, paper prints taped to the wall of the gallery, when viewed from a privileged point of view, can deceive the viewer. They give the idea that objects, such as a framed picture, or my body, can penetrate a wall and extend to the space beyond-or tilt in such a way that is incongruent with the confines of the room.

I continued this technique when I went to a residency at the American Academy in Rome (see Sconce, Radiator). In this series a faucet, radiator, or wall sconce was photographed, then reproduced as a paper print after being carefully distorted in Photoshop. Taped to the wall in a different location and re-photographed in situ, these objects appear to defy the limitations of the room's floor plan.

The work took a different tack a few years ago when I photographed objects or my body in a space, then recreated them in paper form, installed them, and once again photographed them in situ. With the work in Rome, the placement of the objects was designed to defy the room's space-here they are more logical, being reproduced where they in fact did exist (see Sit, Stand).

I am currently making work that exists as single photographs, documents if you like (to be placed in a frame and exhibited), but can also be exhibited as large paper installations (see New Corners). In this case, viewers will be encouraged to walk around the gallery and find the privileged point of view for themselves. Related to this, I am also combining objects and images, with Chairs.

By using these tactics, by emphasizing the tension that exists within photography, playing up its ability to dissemble, I have moved its emphasis from transparency to trickery. This in turn posits the viewer at a point where depiction and deception meet-and hopefully leaves them teetering between the two.