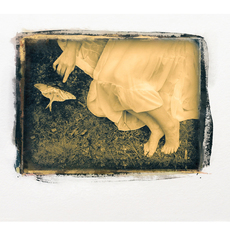 Because photography is such a representational media, work often becomes very literal. When we add to that the element of color, we contend with the sense of pretending to be real. The black and white image neutralizes this and allows work to stand a little firmer on a conceptual foundation with less distraction. Within the black and white image I often use a narrow range of focus; which leaves a lot to the imagination. This imaginative space promotes mystery and implications of a film noir look, permitting real time and remembered time to cross paths.
This particular (still in process) body of work, which I title Inculcated Domesticity, investigates domestic space and cultural expectations within a feminist perspective. The narrative considers whose eyes originally view the scene and what is their gender role through object images. Some images are preconceived and visualized in an imagined world, and some, while I sort of kind of have a feeling of direction, require prolonged engagement with the idea to come up with an image that works. Sometimes that never happens, but when it does it is like a gift.
I approach these images with a variety of camera formats ranging from large format film (8 x 10) to digital SLR. I combine these formats through scanning along with bringing darkroom to the digital process creating large files possible to print oversize 90-inch tall banner-like images that confront the viewer with larger-than-life object image phantoms.
I believe images can possess an aura. This is typically referred to in terms of authenticity per Walter Benjamin. I consider it in terms of an intangible quality surrounding the image. String theory, with the 7-to-11 or so possible dimensions of which currently we are only aware of four, at least acknowledges that energy never dissipates, it just changes. So it makes sense that occasionally when a photograph is missing that aura, the artist can give it back. Because I am not immune to re-entering the work either physically or in the virtual world, it frees up work to become post-process investigated. Either way puts the hand of the artist back into the work.