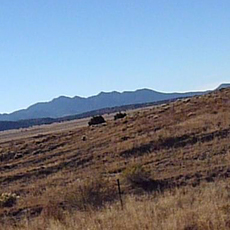 Perception of landscape is affected by how we move through it. With an increase of speed, we lose the ability to see clearly; our movement makes the landscape seem less defined. Yet our minds can take an assortment of broken, distorted impressions and fabricate an image of a complete environment. We fill in the blanks to make a whole vision.

As humans have come to rely on machines to accelerate movement, we in turn depend on technology to capture and reproduce the momentary experience. Our recall is supplemented and often dominated by the photographic record.

The images in this body of work are taken directly from digital video, recorded while driving through New Mexico. But the world captured by the camera appears vastly different from the one experienced and remembered. The intervention of technology and the distortions, failures, and digital artifacts in this reproduced world reinforce the dissonance between the human eye and the camera. Recording the landscape compresses the environment; first into a two-dimensional sequence and then into a single frame. Our familiarity with the cinematic makes the "film still" familiar, but these stills, extracted from the video and presented unaltered, seem to further challenge the notion of the frame. The curtain of reality is pierced and then patched, and we glimpse a moment between moments; the spaces between the frames.