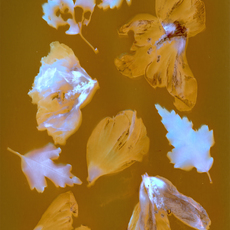 I prefer that my on-going Unidentified Woman series exist with little explanation. I have been working with self-portraiture since the 1970s, and I have been working with the Unidentified Woman series for well over a decade. To me it describes how our fragile constructed identities shift and shatter and reconstitute over a lifetime, and how the female identity undergoes its own specific restraints and transformations.

There is a starting place and a story that may be of interest, though the telling may restrict the much broader interpretation I desire:

The series of collages entitled Unidentified Woman describes in part my identity-altering experience of being run over by a tractor-trailer while driving on an interstate during a snowstorm. In one expanded "instant," I became "an unidentified woman" in our local newspaper, and also an egoless entity dissolving in an infinite universe.

Sometimes we can see the future in a snapshot from the past. Long before the accident, I chose a very small section of a photograph of myself made by my friend Ron Richardson in 1973. I altered it in the computer, adding pixelated frozen tears to the cheeks, then further transformed it by printing variations as polymer gravures.

After the accident, I started a series of self-portrait collages about the event and my on-going reactions to the experience, one that had propelled me to experience "instant nirvana." I tore and cut copies of my digitally altered face, then stapled and sewed them together, reconstituting the new "unidentified woman." Usually displayed as a wall of faces, the images work best in any arrangement when combined in groups of 3 or more.

While recovering from minor surgery related to the accident, I built on the collage project, and I continue to work on the series today. A body of work from this Unidentified Woman series was selected by curator Colleen Kenyon at the Center for Photography at Woodstock NY to be part of "Once Upon a Time," an exhibit centered on life-changing events, traumatic experience and how it changes the art one makes.