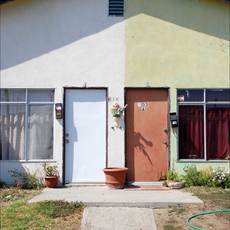 
During a dinner party conversation in my parents dining room in about 1969, a composer friend described a fantasy recording instrument sensitive enough to read the sounds etched into the walls by the impact of sound waves. That possibility of being able to listen to the history of a place--playing back an echo of the past--has resonated in my work and the way I think about photographs. I imagine that photographs provide proof of a moment in time but also, by inference, evidence that all other moments exist.

Each image in the Layers project is a collaboration. With this group of works most of the creative decisions that normally belong to the artist/photographer (subject, point of view, light, camera, time) were made for me decades and, in many cases, more than a century ago. I am simply, miraculously, revisiting moments in time, trying to share an experience with men and women that I'll never meet.

When I am making my version of the photographs, I try to imagine the original scene: what the weather was like, what sounds were in the air, what people were thinking and feeling, and what world events were shaping life in this small corner of California.