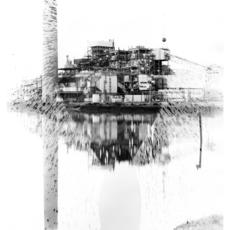 Where the Savannah River and the city of Savannah, Georgia meet, an intricate relationship is formed between humans and nature. Since the founding of the city, the river has been utilized to sustain the local community, and with this progress, the Savannah River is no longer a natural waterway; it is now a freeway for commercial and industrial activity.
By integrating water samples from the Savannah River into the photographic process, the images in Water Study reveal the impact that industrial activity has had on the river. These abstract representations reveal a value system that prioritizes economy over ecology.