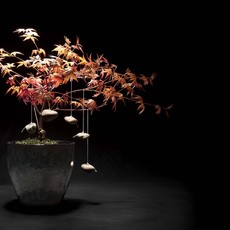 My family's immigration from Okinawa to Hawaii has been shrouded by the passing down of stories. I heard that my Great-grandparents lived on Momohara Island. It was said that you could only get there by foot at low tide. I imagined no one else lived on the island but our family. And such a small, remote island would be abandoned by now...

The Islands body of work is inspired by a trip I took to Okinawa to investigate my family's life there before immigrating in the early 20th century. During my visit, however, old stories proved false. In actuality, there was no Momohara Island. In fact, my real family name is not even Momohara. This new knowledge has added to the legacy of my Great-grandparents. And I am thankful and intrigued by the facts I was able to learn. However, the "myths" did not die in my mind. I could not abandon their charm or my absorption.

Legacy is not factual, but fluidly ebbs with its various human carriers. This is what happens when memory becomes collective and history is owned by those of us remaining. A story passes from one person to the next, to the next, and so on""and with each person the account alters slightly.

I began to think about islands as metaphors for issues of legacy and memory. Islands are often associated with isolation, seclusion, exoticism and paradise. Throughout history, Islands are symbols for the inner person. "Every man is an island" / Jung. "No man is an island entire of itself; every man is a piece of the continent" / John Donne. Many staples in our creative culture use the islands to symbolize emotional states: Homer's Odyssey, where a difficult journey takes place over a series of islands; Mutany on the Bounty, where sailors rebel against their captain for a life in Tahitian paradise. Movies like Cast Away and television shows such as Survivor examine taxing elements of isolation and aspects of taming the tropics. And of course, one cannot forget about the television show "Fantasy Island" where guest literally wished their wildest dreams true.

Islands uniquely navigates traditional landscape and studio creations. The studio creations are imaginary islands made of symbolic materials and my moody landscapes were taken in Okinawa and Hawaii. These real and fictional spaces discuss dreams of a belonging, the unknown, memory and place.