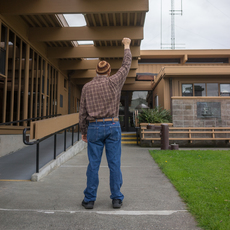 In 2007, I began a journey of both discovery and rediscovery in the well-worn ruts between places I went as a child, and became an archaeologist of my own history, excavating the documents and photographs left behind in a house we moved out of in 1968. Ultimately, this led to a deep photographic investigation of the places between my hometown and the more rural northern California areas to which my family traveled annually in the 70s. Places that seemed magical in youth, either create different emotions in adulthood, or are wondrous for different reasons than in childhood. Sonoma County in California's redwood biome, and in particular the town of Guerneville, has a landscape whose face has been surfaced and resurfaced generation after generation by the force of human ingenuity and desire. For me, it is a place that is both the physical manifestation of the terminus of manifest destiny and the industrial revolution. An act of Congress in 1916, we legislated away manifest destiny toward a culture of conservancy, with photographs by William Henry Jackson and Yellowstone as evidence of the need for protection. But for the Redwoods of Sonoma County, it came long after San Francisco had been built twice with the timbers of old-growth Coastal Redwood and Giant Sequoia. Today's Sonoma County is a blend of conserved state and regional parks, wine producers, camping resorts, and the a diverse population of local year-round residents who keep these industries afloat. Much of the work has focused on this area, and other attractions in surrounding counties. The opening of the Golden Gate Bridge in 1937, which created easy and inexpensive access to the great redwoods --the wilderness. I am now looking at those wilds with a new understanding that the forest I explored on those trips as a child, were a logger's set-aside of a "natural" forest that in all likelihood stretched right back to the urban area I call home. The transformation of the area from an extractive industry to one of tourism is paramount.