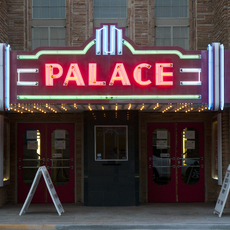 The name of this Portfolio, "Please Remain Standing" is a nod of recognition to the manager of the Carib movie theater in Clearwater, FL in the 1970's. Prior to every single show, Clarence would request over the loudspeaker to "Please remain standing for our national anthem" after which he would play a scratchy reel of the "Star Spangled Banner". If someone in the audience did not stand, Clarence would stop the film, clear his throat (again, over the loudspeaker) and in an irritated tone repeat "Please remain standing..."; the reel would not begin until there had been compliance in the theater. The Carib and Clarence have long passed on, but that theater inspired me begin the journey of photographing this portfolio of vintage movie theaters across the United States, now in its 30th year. A quote from the book "What Time Is This Place" by Kevin Lynch summarizes my intentions: "One danger in the preservation of environment lies in its very power to encapsulate some image of the past; an image that may in time prove to be mythical or irrelevant. For preservation is not simply the saving of old things but the maintaining of a response to those things." The entire portfolio incorporates color as well as black and white photographs of movie theaters and drive-in theaters built between 1910 and 1950, ranging in location from Florida to Alaska, from Texas to Illinois and many locations in between. I hope that you will enjoy my attempt to preserve the very essence of spirit and illusion that made us all so enamored by the theaters in the first place. If you have a memory of attending a theater that you would be willing to share, please contact me through my website at www.busybstudio.com.