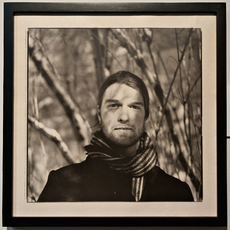 Stemming from the Finding a Green Photo project, the green man portraits are a series of portraits that are the remnants of the session. Rather than try to make a photograph where one learns more about the subject, I wanted to photograph after the acceptance of the camera has been made and the subject is no longer posing. I would meet my subject and talk with them trough the camera lens, sometimes for up to an hour, before making an exposure. The only direction I gave was that I didn't want them to pose; yet I was getting them to push back into the background.

The photos are unnamed because I wasn't photographing subjects, only people. Their significance is with me alone though others may recognize them in certain times or places.