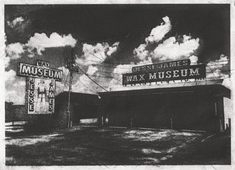 Art and history collide in an exciting and engaging exhibition this summer at Jody Klotz Fine Art in Abilene, Texas. The gallery will have two series of etchings by the prolific Dallas-based artist Colette Copeland from her project entitled My Jesse James Adventure. In a collection of stunning solar plate etchings and chine collé prints made from portraits of James, Copeland's photographs of locations related to his history, and images from the commercialization of the Jesse James icon, Copeland tackles modern day issues through the lens of the outlaw's history and life.

The solar plate etchings trace much of Jesse James' history, including images from locations of his outlawing, places of interest such as the Jesse James Wax Museum, and images of movie posters such as the 1966 film Jesse James Meets Frankenstein's Daughter. Copeland deftly juxtaposes vintage imagery and modern occupation in this fascinating series. The chine collé prints feature a portrait of Jesse James, age 16 from the Library of Congress printed on aged pages of the book Jesse James, Last Rebel of the Civil War written by historian/author T.J. Stiles and gold leafed with gunpowder and the artist's blood.

This project was a labor of love for Copeland, inspired by her ancestral connection to Jesse James, and culminated in a quest spanning 9 states and over 4000 miles. The artist's interest in James was sparked by family lore as her great-great-grandmother was James' cousin by marriage. She visited sites of James' outlawing, documenting her visits, and leaving some of her own DNA in the form of locks of hair at each site.

"While I knew that My Jesse James' Adventure would involve another performative journey—one that spanned many days and miles, for he was quite a prolific outlaw, my quest goes beyond the personal connection of a namesake or literary heritage to examine issues of fake news, gun violence and criminal celebrity stardom." – Colette Copeland.