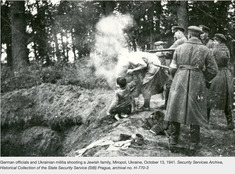 Holocaust by Bullets: The Early Collaboration to Wipe Out Europe's Jews

The US Holocaust Memorial Museum will host an upcoming live digital program on Thursday, September 30 at 9:30 am ET - the 80th anniversary of one of the largest mass shootings that happened during Germany's invasion of the Soviet Union.

Holocaust by Bullets: The Early Collaboration to Wipe Out Europe's Jews

A grainy photo captures a cold-blooded murder in action. Men in uniform shoot a woman and two children for the "crime" of being Jewish.
This rare photographic evidence shows how Jewish families were brutally murdered—often with local cooperation—during Germany's invasion of the Soviet Union in 1941. Join us to learn more on the 80th anniversary of one of the largest of these mass shootings, at the Babi Yar (Babyn Yar) ravine northwest of Kiev, where close to 34,000 Jewish men, women, and children were gunned down in two days. As many as two million Jews were killed with bullets and at associated massacres across former Soviet territory.

We invite you to share the description and link listed on the Museum's website (https://www.ushmm.org/online-calendar/event/vefbbabiyar0921) and/or the Museum's Facebook page (https://www.facebook.com/events/570232220794590/) with colleagues and others who might be interested. Following the event, the program will be available on-demand so people can tune in when convenient.

You can learn more about this forgotten chapter in Holocaust history in an op-ed in the Washington Post (https://www.washingtonpost.com/outlook/2021/09/22/holocaust-by-bullets/) written by Museum Historian, Edna Friedberg.

Please feel free to reach out for more information or questions. We hope you can join us.