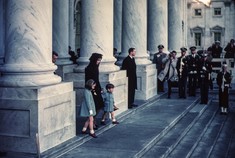 Join DCP and Dallas pathologist and photographer, Dr. Tom McConnell, on Thursday, November 19 at 6:30 pm CDT for an online event about his life in medicine and his connection to events associated with the assassination of President John F. Kennedy in 1963.

A reviewer of Dr. McConnell's memoir (Dead Wrong) described him as "…a high-IQ version of Forrest Gump, whose touchstones through life parallel many of the quintessential events in twentieth-century America." In this one-hour webinar, Dr. McConnell will recount how his medical training, military service, an interest in photography and a dose of serendipity resulted in the powerful photographs he took at the funeral of JFK in 1963.

There were other intersections with the JFK story for Dr. McConnell. He was present at the autopsy of Jack Ruby and did the autopsy on Lee Harvey Oswald's landlady. During his pathology training at UT Southwestern and Parkland Hospital his interest in JFK expanded after reading the Warren Commission report on the Kennedy autopsy. He accurately surmised that JFK was afflicted with a disease that was denied during President Kennedy's life.

With his trademark blend of creative insight, dry wit and medical knowledge, Dr. McConnell will tell his story and show photos from the JFK funeral that have never been shared before with the public. As is often the case, pictures taken with no particular motive other than capturing a moment can weave themselves into a person's life. For Dr. McConnell that thread pulled him into a passion for photography and added to his appreciation of art in other forms.