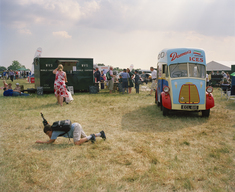 Melanie Friend started her career as a photojournalist and radio reporter producing photographs for the anti-nuclear movement and for The Guardian and
Independent newpapers, and radio features for BBC Radio Four & BBC World Service.

From the mid 1990s she began working on long-term photographic projects. Her book No Place Like Home: Echoes from Kosovo, comprising interviews and
photographs, was published in 2001 (Midnight Editions, USA); it was one of The Independent's 'Books of the Year' (2001) and widely reviewed in the UK, USA
and Kosovo/a.

Her work has been exhibited internationally, including shows at Gallery 44 Centre for Contemporary Photography, Toronto, the Hasselblad Centre, Sweden
& the Houston Center for Photography, USA. Touring exhibitions, with accompanying publications, include Homes and Gardens: Documenting the Invisible (1996), and Border Country (2007). Both these works combined soundtracks with still images. Border Country, first shown at Belfast Exposed gallery, Belfast, was shortlisted for the European Central Bank Europe Photographic Award 2008 & exhibited in the finalists' show in Frankfurt (Germany). Her latest exhibition The Home Front opened at Impressions Gallery, UK in 2013 and is touring. The exhibition was nominated for the Prix Pictet in 2013 & 2014 and the accompanying book The Home Front was nominated for the Deutsche Börse Photographic Prize 2015.
Friend has given Guest Lectures about her work at the universities of Oxford (UK), Harvard (USA), and Ryerson (Canada) among others. Her work has been
widely reviewed in both mainstream press and specialist photographic publications. Her prints are held by the National Portrait Gallery, London, the James Hyman Gallery, London and in private collections.
Friend is Reader in Photography in the School of Media, Film and Music at the University of Sussex, UK.