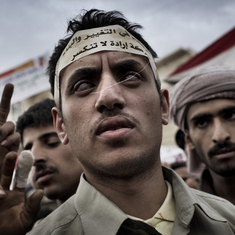 As a photojournalist for the past 25 years, Yuri Kozyrev (Russia, 1963) has witnessed many world-changing events.

Since the beginning of 2011, Yuri has been documenting the uprisings and their aftermaths in Bahrain, Yemen, Tunisia, and especially Egypt and Libya.

Yuri has received numerous honors for his photography, including several World Press Photo Awards, the OPC’s Oliver Rebbot Award, and the ICP Infinity Award for Photojournalism, and in 2008 he received the Frontline Club Award for his extensive coverage of the Iraq war.

His extensive body of work documenting the “Arab Revolutions” received wide industry recognition. On Revolution Road - chronicling the revolts in Egypt, Bahrain, Yemen and Libya made for TIME magazine - won the 2011 Visa d'or News at the international festival of photojournalism Visa pour l'Image. At the Prix Bayeux-Calvados his work Dispatch from Libya won both the Trophee and the Public Prize. In 2012 his work was awarded at the World Press Photo Contest and he was named the 2011 Photographer of the Year in the Pictures of the Year International competition.

Part of the LOOK3 Festival.