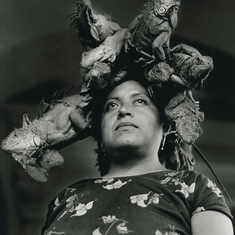 Blending her acute observation, primarily focusing on the cultures of her native Mexico, with her own deeply emotional, personal vision, Iturbide’s photographs reveal the extraordinary in the ordinary, evoking the tensions of those who live on the fringes of their own culture with either a sense of belonging or marginalization. She is at once ethnologist, anthropologist, and poet. Her images suggest a believer in the decisive moment and in timelessness, a lover of ritual and a celebrator of freedom. Their vitality draws from this dance between the real and surreal, the precise, and the untethered.

Iturbide is the recipient of the W. Eugene Smith Memorial Foundation Award, 1987; the Grand Prize Mois de la Photo, Paris, 1988; a Guggenheim Fellowship for the project ‘Fiesta y Muerte’, 1988; the Hugo Erfurth Award, Leverkusen, Germany, 1989; the International Grand Prize, Hokkaido, Japan, 1990; the Rencontres Internationales de la Photographie Award, Arles, 1991; the Hasselblad Award, 2008; the National Prize of Sciences and Arts in Mexico City in 2008; an Honorary Degree in photography from the Columbia College Chicago in 2008; and an Honorary Doctorate of Arts from the San Francisco Art Institute in 2009.

Part of the LOOK3 Festival. Book Signing to follow.