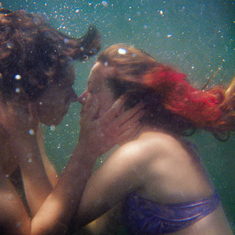 Bee has shot photographs for brands such as Hermès, Levi's, Adidas, Cacharel, Nike, Valentino, and Roger Vivier, and editorial features for publications such as The New York Times Magazine, New York Magazine, Le Monde, Numéro, and Vogue.com, as well as creating content for select musicians on Atlantic Records and Interscope Records. Her photography has been featured in two solo shows at agnès b, New York, and Bernal Espacio, Madrid. Now twenty-two, she takes photographs all over the world and with her images, continues to search for utopia.

Bee’s work is largely focused on her own life and that of her friends. Her first monograph, Olivia Bee: Kids in Love will be published by Aperture this spring. It features work from two series: Enveloped in a Dream, created during her teen years and Kids in Love (2009 – 2013). Bee’s frequent collaborator and model Tavi Gevinson, founding editor of the online magazine Rookie, writes about the work in this title, speaking to the role of images as social currency in today’s image-driven world.

Part of the Look3 Festival. Book signing to follow.