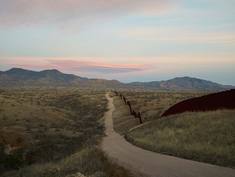 Join Richard Misrach and Guillermo Galindo for a conversation about their upcoming book, Border Cantos (Aperture, 2016). This City Arts & Lectures event will include an original piece created and performed by Galindo and vocalist Amy X Neuburg, featuring instruments made from items found along the border, as well as projections of Misrach’s images. Alexis Madrigal will lead a conversation with the artists. A book signing will follow.

Border Cantos is a cross-disciplinary exploration of the U.S.–Mexico border, developed collaboratively by photographer Richard Misrach and composer Guillermo Galindo. The project features monumental landscapes by Misrach and musical instruments created by Galindo from found objects recovered at the border: a shoe, a water bottle, a backpack. Border Cantos offers new avenues for approaching heated political issues around immigration, border security, and immigration reform, and is a poetic response to the often polarizing discussions around these issues.