As a non-resident alien in the United States, originally from formerly colonized India, I am compelled, both personally and academically, by the subjects of identity and politics. I have two ongoing bodies of work, Pre/Post/Eros 2.0 & Appropriated Figure-Grounds. The network of works collectively titled Pre/Post/Eros, explored the transition from postcolonialism to neocolonialism, with special attention paid to history, capital, and spectatorship, using the mediums of photography, video, installation, sculpture, and new media. Appropriated Figure-Grounds is a series of images probing the relationships between news media and global figures of power. These images were created by appropriating online news photographs of the back of political and corporate leaders as well as photographs of their hands during news conferences. 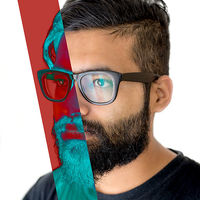