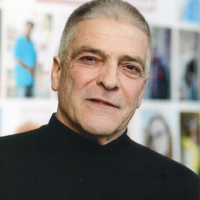 Vincent Cianni is a documentary photographer, educator, and community organizer. He graduated with a Bachelor of Science in Community Development at Penn State University, attended Maryland Institute College of Art and received a Master of Fine Arts in Photography at SUNY New Paltz. Cianni teaches photography and theory at Parsons The New School for Design and is the founder/director of the Newburgh Community Photo Project, a grass roots community-based organization that teaches photography to local citizens to explore topics relevant to their lives. The Archive for Documentary Arts (Duke University) established a study archive of his photographic work in 2007. We Skate Hardcore, published by NYU Press and the Center for Documentary Studies in 2004, was awarded the American Association of University Press Best Book Design and a major survey of this work was exhibited at the Museum of the City of New York in 2006. Gays in the Military, an investigation into the effects of the military's ban on the lives and careers of LGBT service members was published by Daylight Books in May 2014 and was featured in the New York Times Sunday Review and The Katie Couric Show. He presented at TEDxUniversityofNevada (2015) and has lectured on his work at the Library of Congress, the American Psychiatric Association and OutServe/SLDN Leadership Conference, and in many photographic, gallery, and museum venues. Cianni's photographs have appeared in The New Republic, Aperture, Double Take, The New Yorker, Slate, ViceUK, Photography as Activism; New York 400: A Visual History of America's Greatest City; The Polaroid Book and numerous anthologies and online magazines. His photographs have been exhibited at the Stephen Daiter Gallery (Chicago), Verve Gallery (Santa Fe), the Los Angeles County Museum of Art, the Museum of Fine Arts, Houston, the George Eastman House, and in national and international photo festivals at Houston Fotofest, KOLGA Tbilisi Photo Festival, and the 7th Internaltionale Fototage Mannheim. His photographs reside in numerous public and private collections including Museum of Modern Art, Rio de Janeiro; The Library of Congress; The Kinsey Institute for Sexual Research; Museum of Fine Arts, Houston; George Eastman House; Philadelphia Museum of Art; Museum of the City of New York, Brooklyn Museum of Art, and Los Angeles County Museum of Art. Cianni currently resides in Newburgh, NY where he is photographing a long-term project - Liberty Street - a name that embodies Newburgh's more than 200-year history and reflects the shifts in America's destiny, giving the name complex, oftentimes contradictory meanings.