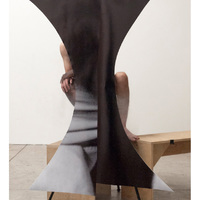 Sepuya's recent works queer the historically sexualized space of the photographer's studio, using reflection, fragmentation, and formalism to complicate and choreograph the voyeuristic relationship between viewer and subject. These constructed images, in which information is withheld and bodies are displayed but obscured, ask the audience to stay and stare while not quite allowing them to see what is. Unlike much of constructed photography; here the viewer is let in on the ruse through the tripod legs, mirror edges, and camera lenses that populate the compositions alongside a multitude of limbs and lush drapery. In speaking of this work, Sepuya has written, "I want these queer, black photographs to exist within historic and contemporary conversations about photography as a whole, affirming the medium and my personal investment in its possible futures."

Paul Mpagi Sepuya (b. 1982, San Bernardino, CA) is a Los Angeles-based artist who's work is currently on view in "Being: New Photography 2018" at the Museum of Modern Art. He received an MFA in photography from UCLA in 2016 and a BFA from NYU's Tisch School of the Arts in 2004. His work is in the permanent collections of the Museum of Modern Art, the Whitney Museum of American Art, and the Guggenheim Museum, among others. Recent solo exhibitions include "Dark Room" at Team (Bungalow), Los Angeles and "Figures, Grounds, and Studies" at Yancey Richardson Gallery, New York City. Sepuya's work has been featured in ARTFORUM, The New Yorker, the New York Times, Frieze, and Art in America and he is a recipient of the 2017 Rena Hort Mann Foundation's grant for Los Angeles artists.