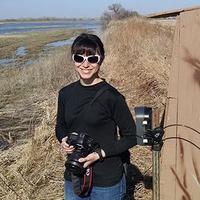 Amanda Breitbach is a photographer and multi-media artist whose research focuses on the complex relationships between people and land. She completed her Master of Fine Arts degree at the University of Nebraska-Lincoln in 2016 and is currently a lecturer in art at Truman State University in Missouri as well as the program coordinator for Art at Cedar Point, a program that blends art and science at UNL's biological field station near Ogallala, NE.

Breitbach grew up on a family farm and ranch in eastern Montana and attended Montana State University, graduating in 2004 with degrees in photography and French. Following graduation, she was an agroforestry volunteer with the United States Peace Corps in West Africa for two years. Before attending graduate school, she worked as a newspaper photographer/reporter and as a freelance writer for five years.

She was a graduate fellow at the interdisciplinary Center for Great Plains Studies from 2014-16 and received a national fellowship from the Joy of Giving Something Foundation/Imagining America in 2014. Breitbach was also a founding member of the UNL Social Practice Coalition, a collective of artists and activists interested in blurring the lines between art, performance, political activism, community organizing, and environmentalism, and has curated several group exhibits focusing on gender and social justice. Her work has been exhibited at the Great Plains Art Museum, the Eisentrager-Howard and Prescott Galleries in Lincoln, Nebraska, the Rourke Gallery in Moorhead, Minnesota, the University of Kansas Art and Design Gallery in Lawrence, the Clarridge Gallery in Bellevue, Washington, Waterworks Gallery in Miles City, Montana, and the Emerson Cultural Center in Bozeman, Montana. A solo exhibition of her project, Land/People, is scheduled for exhibition at the Bone Creek Museum of Agrarian Art in David City, Nebraska in 2017.