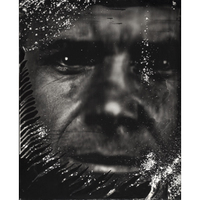 Photography, which for me had started as an art form, over the last several years has evolved into something less personal and true, a process that has become vapid, much less inspiring, and therefore significantly less fulfilling.

As my career progressed, "technological advances" in the digital image-making process replaced the "old" way of making images and I ended up spending all of my time in front of a computer editing code rather than capturing life. I began to lose all connection to the search for the most important component of the photographic art - the never ending search for the image that, absent any words or supporting information, reveals a hidden truth. This all changed when I began working with a process that would take my art and my life in a new direction.

Over the past 18 months I have been working with a nineteenth century process called wet plate collodion. This is one of the earliest forms of photography and it produces some of the truest images I have ever captured. Using wet place collodion, my hand literally touches and oversees every step of the process. Each unique plate is a 8x10" direct positive, there is no negative or print. The silver used in this process reflects light in a way that no other film or digital process can. I am now able to produce unique, one-of-a-kind works of art, impossible to replicate, that express my true artistic vision and capture so eloquently the essence of my subjects. My first thought was to make an enlargement to show the incredible detail and beauty made possible by this 150 year old process. I placed the plate into the scanner as if it was a traditional piece of film. An overwhelming feeling of sadness came over me - I realized I was reverting back to something that was less personal and true. I was faced with a major
dilemma.

Weeks passed. All of the sudden the answer was right in front of me. The city of Los Angeles was framed perfectly in a gigantic window. I had an idea that became so profound that it changed my life forever. I knew at that moment that I was going to make original wet plates in a size that one could only dream of.

Every waking moment became dedicated to making this dream into a reality. The first step was to build a camera. The most important piece to any camera is the lens. I discovered they did exist, but are very rare and almost impossible to acquire. To this day I believe it was no accident, but destiny, that brought the lens to me. Which began a year-long journey of repeated failure, hundreds of prototypes, and constant frustration. Then one day I realized the only way to make this "old" technology work on the scale I envisioned was to become one with the camera - working inside and becoming part of the actual mechanical process that captured the images I was hoping to, no, needed to create.

The day finally arrived where everything fell into place. I succeeded in making an image that was 27x36". I have been told it is the largest image of its kind ever created. I had now reached another turning point in the amazing journey that had become my life's work. l realized l had not created a camera, but a time machine. In the process of losing my way it had taken me on a tremendous journey back to the 1800s where I discovered wet plate collodion. l had time-traveled the way you would in a dream. Taking me backward into the future. A future where you paint with silver and light.