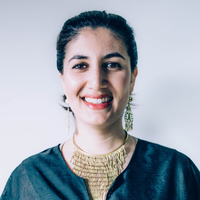 Manzanar: Tracing Shadows of Oppression Across Time and Space

Gazelle Samizay's photographs and videos have been exhibited across the US and internationally, and most recently at the Craft and Folk Art Museum, Los Angeles; Museum of Latin American Art, Long Beach; Whitechapel Gallery, London; and the Wing Luke Museum, Seattle. In addition to her studio practice, she has taught courses in Afghanistan, Jordan and the US, and her writing has been published in One Story, Thirty Stories: An Anthology of Contemporary Afghan American Literature. Samizay received her Master's in Fine Arts in photography at the University of Arizona and is a recipient of the Princess Grace Experimental Film Honoraria.