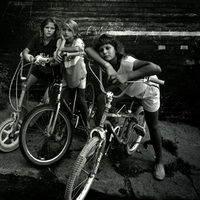 Charlee Brodsky, a fine art documentary photographer and a professor of photography at Carnegie Mellon University, describes her work as dealing with social issues and beauty. Her book, I Thought I Could Fly... Portraits of Anguish, Compulsion, and Despair, a collection of her photographs and personal narratives by people living with mental disorders, was published by Bellevue Literary Press in the Spring, 2008. Her recent book, Street, a collection of her photographs and Jim Daniels' poems, published by Bottom Dog Press in 2005, won the Tillie Olsen Award in 2007 given by the Working Class Studies Association. In 2003, the University of Pittsburgh Press published Knowing Stephanie, a book about Stephanie Byram's life with breast cancer featuring Brodsky's photographs. This book was one of only eight books accepted in the illustrated book category of the American Association of University Presses' outstanding books of 2004 exhibition. In addition, in 2002 Brodsky received a regional Emmy with three others for her work on Stephanie, a documentary video.

Among other projects, Brodsky photographed the former steel town of Homestead, Pennsylvania. With anthropologist Judith Modell, this project resulted in the book, A Town Without Steel, Envisioning Homestead, published by the University of Pittsburgh Press in 1998, as well as numerous exhibitions. Brodsky has also curated exhibitions dealing with the history of photography in Western Pennsylvania. This work culminated in "Pittsburgh Revealed" curated with Linda Benedict-Jones, a major exhibition at the Carnegie Museum of Art in 1997, accompanied by the book of the same name. Brodsky exhibits her work nationally and regionally, has been honored with Pennsylvania Arts Fellowships and other awards, and often works with writers. She is presently working on a number of projects; one with Sally Stewart, a poet, about Sally's extreme weight- loss through gastric by-pass surgery; another with painter Robert Qualters-featuring her photographs of Bob, a 71-year-old artist, and his reworking of her photographs; a project photographing a group of girls over a span of ten years from age 10 to 20; she continues to photograph Homestead, working with poets Jane McCafferty and Jim Daniels, as this Western Pennsylvania community evolves from its steel mill past to a town with a mall where blast furnaces once stood; and she is collaborating with Sreyashi Dey, director of Srishti Dances of India, on photo-digital pieces that will be seen in performance, on the internet, and in galleries. Brodsky received a Masters of Fine Art from Yale University School of Art, and a Bachelor of Arts from Sarah Lawrence College.