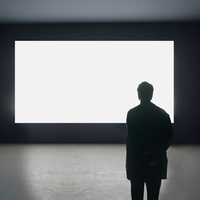 Alfredo Jaar is an artist, architect, and filmmaker who lives and works in New York. He is known as one of the most uncompromising, compelling, and innovative artists working today.