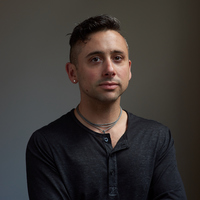 Lorenzo Triburgo is a Brooklyn-based, multimedia artist employing performance, photography, video, and audio to cast a critical lens on notions of the "natural," the construct of gender, and the politics of queer representation.

Using an understated yet radical approach that includes portraiture, landscape, and studio practice, Lorenzo reclaims power for LGBTQ communities and others traditionally ignored by media and popular culture or conquered by an outsider's gaze.

Lorenzo has artworks in the permanent collection of the Museum of Contemporary Photography in Chicago, IL, and the Portland Art Museum in Portland, OR. Lorenzo has been featured in Slate, Huffington Post, HuffPo-Live, and the Transgender Studies Reader 2 edited by Susan Stryker and Aren Aizura (Routledge).