Much of my work addresses family history, ethnicity and memory. Of particular interest is the incarceration of Japanese Americans during World War ll. My father and his family were sent to two wartime camps, one in California and the other in Wyoming. After the war, the larger regions around both camps were settled by returning veterans in a government-sponsored homesteading program. Barracks once used to house Japanese Americans were repurposed by the homesteaders as homes and barns, moved and erected onto their newly acquired land. In Camp Home (2007-present), I document the reuse of these buildings in order to capture elements of domesticity within structures that could possibly have been home to my family.

My research for the Camp Home work led me to wonder about the transition that Japanese Americans made, from West Coast houses, apartments and farms, to being housed in hastily

constructed military-style barracks. The artist's book, A Guide to Modern Camp Homes: 10 New Models & Plans for Persons of Japanese Ancestry, was inspired by The Book of Modern Homes (1940), published by Sears, Roebuck and Company. The company's home catalogs featured house designs with names like "The Cape Cod" and included upbeat descriptions and illustrations of house features. I wrote and designed the artist's book using newly commissioned architectural drawings and photographs from the Library of Congress and National Archives, while appropriating tone and language common to both U.S. Government documents and advertising of the day. 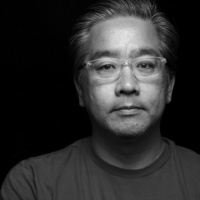