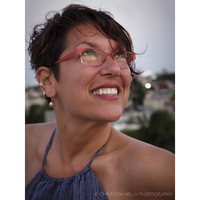 Miriam Romais is a New York based Brazilian-American photographer and arts professional. She is the recipient of a 2018 #HabitatForArtists residency at WAAM (Woodstock Artist Association Museum) and a 2016 Saratoga Arts' Individual Artist Grant. As an awarded photographer, her work has been exhibited in museums and galleries throughout the U.S. and abroad, including El Museo del Barrio, Museum of the City of NY, the Smithsonian Institution as part of its nationally traveling exhibition Americanos: Latino Life in the U.S., Brookside Museum, Saratoga Arts and LARAC.

Romais has served as a panelist for the Schomburg Center for Research in Black Culture's Visually Speaking series, (Mis)representation: the Under Representation of Non-Whites and Women in the Arts at PhotoPlus Expo, and was co-chair of the Society for Photographic Education's National Conference titled Facing Diversity: Leveling the Playing Field in the Photographic Arts.

As a curator, she has created exhibitions for Aperture (Mexico + Afuera: Contemporary Mexican and Mexican American Voices and Selections from the Permanent Collection), Light Work (Tracing Memory), BRIC Arts Media (Short List), Society for Photographic Education's Multicultural Caucus (Interstice), Bruce Silverstein Gallery, and dozens for En Foco Inc. She is a former Executive Director for En Foco, a non-profit that supports U.S. based photographers of Latino, African, Asian and Native American heritage, and is now the Marketing & Strategic Development Advisor for the Center for Photography at Woodstock.