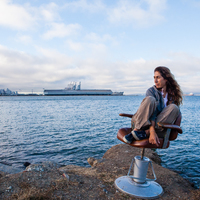 Ana Teresa Fernández, born in 1980 in Tampico, Mexico, lives and works in San Francisco. Her work explores the politics of intersectionality through time-based actions and social gestures, translated into masterful oil paintings, installations and videos. Within her work, performance becomes a tool for investigation as strong feminist undercurrents flow together with post-colonial rhetoric. Through her work, the artist illuminates the psychological and physical barriers that define gender, race, and class in Western society and the global south.