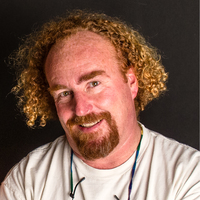 Syl Arena is a California-based artist / educator known for his explorations of non-representational photography. In a manner that echoes the work of Bauhaus artists, he is obsessed with the interaction of surface, color, and shadow. Looking beyond the world of abstraction, Arena calls his photography "non-mimetic" as his photographs are intended to be new realities rather than an extraction of the scene before the lens.

During the past three years, his photography has been exhibited in 20 group shows. Among the most noteworthy are: '2016 Aperture Summer Open: Photography Is Magic' at the Aperture Foundation in New York, 'Contemporary Photography 2018' at the CICA Museum in Korea, and 'Visions of Cuba' at Fototeca de Cuba in Havana.

Arena earned his MFA from Lesley University (Cambridge, Massachusetts) and his BFA from the University of Arizona (Tucson, Arizona). He teaches analogue and digital photography at Cuesta College in San Luis Obispo and West Valley College in Saratoga. His books, 'Lighting for Digital Photography' and 'Speedliter's Handbook', have been translated into ten languages.