The 11th anniversary of the attacks on the World Trade Center has passed. For over a decade the United States has been at war. For the majority of citizens, life remained status quo. The burden and sacrifice was borne solely by the members of the volunteer army and their families. News of the Iraq and Afghanistan wars vanished from the front-page eclipsed by pressing issues on the home front.
Soldiers are coming home after multiple deployments: wounded, suffering from posttraumatic stress (PTS) and traumatic brain injury (TBI). The death toll attributed to suicide in soldiers and veterans is greater than the number killed in combat. Many experience problems readjusting to civilian life and face obstacles getting the needed care.
My work considers life on the home front in an attempt to bridge the gap between veteran and citizen and to put a face on some of the issues.

We have yet to realize fully the impact of soldiers returning home from a combat zone as they reintegrate back into society. As they need our help, understanding and compassion, we will no longer be able to keep the sharp delineation between home front and warfront. The war has come home. 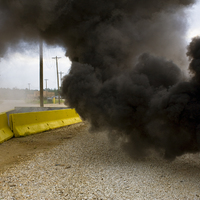