Until 2008 Nevada was the fastest-growing state in America. But the recession stopped this urbanizing gallop in the Mojave Desert, and Las Vegas froze at exactly the point where its aspirational excesses were most baroque and unfettered. In this third Radius Books' installment of noted photographer Michael Light's aerial survey of the inhabited West, the photographer eschews the glare of the Strip to hover intimately over the topography of America's most fevered residential dream: castles on the cheap, some half-built, some foreclosed, some hanging on surrounded by golf courses gone bankruptcy brown, some still waiting to spring from empty cul-de-sacs. Throughout, Light characteristically finds beauty and empathy amidst a visual vertigo of speculation, overreach, environmental delusion, and ultimate geological grace.
Janus-faced in design, one side of the book plumbs the surrealities of "Lake Las Vegas," a lifestyle resort comprised of 21 Mediterranean-themed communities built around a former sewage swamp. The other side of the book dissects nearby Black Mountain and the city's most exclusive and empty - future community where a quarter billion dollars was spent on moving earth that has lain dormant for the past six years.
Following the boom and bust history of the West itself, Light's photographs terrifyingly and poignantly show the extraction and habitation industries as two sides of the same coin. 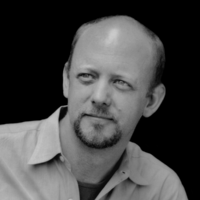