An Index of Return - Sama Alshaibi

In late 2021, Sama Alshaibi returned to Baghdad, Iraq, after a 40-year absence of forced exile. The homecoming reunited her with the lived social reality for Iraqis within a postwar metropolis­––sites of struggle evidenced across the crumbling infrastructure and the nearby endangered landscape. Alshaibi's presentation reflects on the allusive nature of one's birthright and sense of belonging, a consciousness that has long occupied her imagination and artwork. The terrain of reaching and return moves through her image-based practice, often activated by her body as subject and instrument that interrogates the built and natural environment in the aftermath of war and displacement. Alshaibi's return to Iraq, a simple refusal to accept a permanent separation, was the start of her newest project. Assisted by emerging imaging technologies, Alshaibi's project connect sets of symbols and relations between various structures, environments, and temporalities. The interconnections of city, country, and citizenship with the statelessness of the migrant, exiled, and stranger can be constructed and understood. 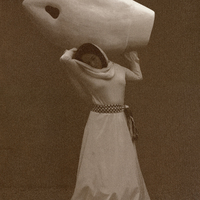