Since Time magazine's now iconic 2014 cover story featuring trans actress Laverne Cox proclaimed the contemporary moment "The Transgender Tipping Point," there has been much debate about the recent proliferation of trans representations across all media sectors. Trans scholars, culture producers, artists, and activists have argued that this is not only a misconception, but it occludes the corpus of trans visual culture made by and for trans culture producers reflecting a wider diversity of trans experiences that do not readily reflect dominant cultural paradigms. Defined as a self-image made with a hand-held mobile device and shared via social media platforms, the selfie has facilitated self-imaging becoming a ubiquitous part of globally networked contemporary life. Beyond this, selfies have facilitated a diversity of image-making practices and enabled otherwise representationally marginalized constituencies to insert self-representations into visual culture. A close look at the prolific selfie practice of Black British, gender-non-conforming, trans-femme performance artist Travis Alabanza reveals their use of Instagram to be a critical intervention into contemporary culture. In self-imaging complex, expansive, and intersectional identity, Alabanza's oeuvre produces new visual exemplars that defy stereotypes and erasures produced by dominant culture while simultaneously challenging our previously held conceptions of identity and self-portraiture. Alabanza's work decolonizes the relationship between the subject and the portrait, encouraging viewers to consider the complex dialectical relationship between images, aesthetics, and communication about identity, performativity, gender, racialization, class, and subcultural affiliations, in effect decolonizing visual theory in contemporary photography. 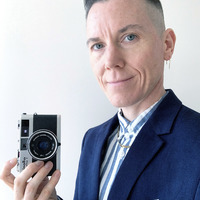