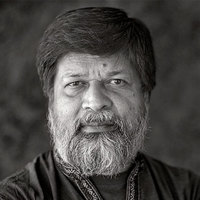 Shahidul Alam (Dhaka, Bangladesh) is a photographer, teacher, writer, and activist. He founded the Drik Picture Library in 1989, the Pathshala South Asian Media Institute in 1998, and the Chobi Mela International Photography Festival in 1999. He is a visiting professor at the University of Sunderland, England. In 2014, the President of Bangladesh awarded the Shilpakala Padak to him.

A world-renowned photojournalist, Alam was arrested and imprisoned in 2018, for an interview he gave to Al Jazeera and video footage he posted live on Facebook, in which he criticized the government for its violent reaction to students whose protests for road safety expanded to protests against government corruption. Pleas rose from Amnesty International and from journalists, artists, and activists around the world, requesting that the Bangladeshi government release him. After more than 100 days in prison, he was released on permanent bail - meaning that the cannot be imprisoned again without a court order. His recent book, The Tide Will Turn (2019, Steidl) describes this chapter of his life. Alam was awarded the Lucie Awards' Humanitarian Award in 2018, and was also named one of Time magazine's Persons of the Year for 2018.