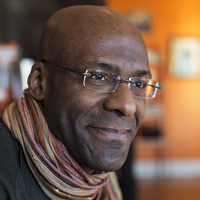 Brian Palmer is a Richmond-based visual journalist and reporting fellow at Type Investigations (formerly the Investigative Fund). Before going freelance in 2002, he served in a number of staff positions: Beijing bureau chief (US News & World Report); writer (Fortune); and on-air correspondent (CNN). Palmer's photos and articles have appeared in the New York Times, the Nation, Smithsonian Magazine, and on websites such as Buzzfeed, ColorLines.com, and Narrative.ly. With his collaborator, Seth Wessler, he received the Peabody Award in 2019 for "Monumental Lies," a story about public funding for Confederate sites, for Reveal radio.

Palmer was commissioned to photograph Richmonders who played a role in the desegregation of schools for Growing Up in Civil Rights Richmond: A Community Remembers, an exhibition at the Joel and Lila Harnett Museum, University of Richmond (Jan. to May 2019). With Erin Hollaway Palmer, he is producing Make the Ground Talk, a documentary about historic black Virginia communities displaced in the 20th century by the U.S. government. In early 2019, they exhibited their photographs, audio recordings, and website projections at Richmond's 1708 Gallery. Other exhibitions with Hollaway Palmer include All Our Sorrows Heal (University of Richmond-Downtown, 2015) and The Afterlife of Jim Crow (Haverford College, 2017). They are the authors of The Afterlife of Jim Crow: East End & Evergreen Cemeteries in Photographs.