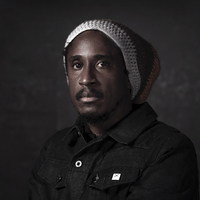 After Chat with Lauri Lyons and Ruddy Roye

Ruddy Roye is a Brooklyn based portrait and documentary photographer. Roye was born in Montego Bay, Jamaica, and studied English Literature at Goucher College.

Roye uses his camera as a tool that allows him to document the world around him as he sees it. The images he produces speak to the human condition, addressing the myriad instances of suffering and injustice he is witness to that are often overlooked. Yet the images he produces of events such as the Hurricane Katrina aftermath, The Black Lives Matter movement, chronic homelessness, and his own personal project When Living is A Protest, do not merely exist to capture misery, but also to convey resilience and compassion. Roye's portraits are frequently produced as collaboration with the people he photographs in tandem with text that further humanizes them and evades their exploitation.

Roye is inspired by the raw and gritty lives of grass-roots people, especially those of his homeland of Jamaica. He strives to "tell the stories of their victories and ills by bringing their voices to social media and matte-fiber paper." Roye is a part of Kamoinge, a collective of African-American photographers, and was featured in the recent documentary Through a Lens Darkly: Black Photographers and the Emergence of a People (2014), a feature-length film on Black Photographers and photography in America, directed by Thomas Allen Harris. Roye has been named one of "The 50 Greatest Street Photographers Right Now" by Complex (January 2014).

Although Roye showcases his work in traditional exhibition environments by posting his images to Instagram (@ruddyroye) he is able to engage with over a quarter of a million followers, bridging the divide between viewer and collaborator and collapsing the space between artist and audience to facilitate deeper engagement and understanding.

"Photography is finding a piece of me in the eyes or essence of everyone and everything I photograph. It has always been a collaborative effort."