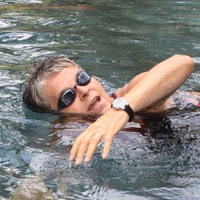 "Swimming Against the Tide: Challenges, Misadventures and Lessons Learned in Four Decades as a Feminist/Artist/ Educator"

Revelle's many awards and public art commissions include being the recipient of a National Endowment for the Art Visual Artist Fellowship and winning a $220,000 commission for a two-city block long, photo-based tile mural - "A People's History of Colorado" on the Denver Convention Center.

Revelle joined SPE in 1973 and served on the Board of Directors for four years. Her panel "Women Teaching Women" at the 1981 National Conference was the catalyst for the first session of the SPE Women's Caucus.