"Secrets of the Harem: Casting Iranian Women's Bodies in Public"

Despite the general belief that Islam forbade the representational images of people and in particular women's faces in 19th century Iran, the king of Persia, Naser al-Din Shah, photographed Persian women in his harem in erotic poses and mostly naked. His interest in photography and the camera led him to unveil the secret life of the private circles of his kingdom. By doing this he opened up the subjects of gender and sexuality in 19th century Iran. This research explores how photography and political power worked hand-in-hand in the production of Iran's modernity. By crossing certain social boundaries, women were empowered to be agents of change. 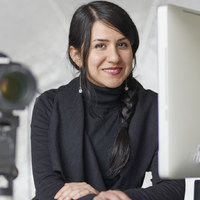