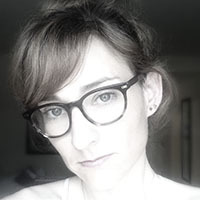 Meg Griffiths was born in Bloomington, Indiana and raised in Houston, Texas. She received two B.A.'s from the University of Texas in Cultural Anthropology and English Literature and earned her Master of Fine Arts from Savannah College of Art and Design. She currently lives in Lexington, Virginia where she is a Visiting Assistant Professor of Art in Photography at Washington and Lee University. Her work has been shown in multiple venues around country, including: Columbia Museum of Art, Center for Fine Art Photography, Museum of Living Artists in San Diego, Center for Fine Art Photography, 701 Center for Contemporary Art in Columbia, Griffin Museum in Boston, Carte Blanche Gallery and Rayko Gallery in San Francisco, and Houston Center for Photography. She has also been published in Oxford American, Light Leaked, Boston Globe, Photo District News, South X Southeast Magazine, Lenscratch, Le Journal de la Photographie, and Fraction Magazine. Her work is a part of many private collections as well as the Museum of Fine Arts, Houston. She was honored as one of PDN 30's 2013: New and Emerging Photographers, commissioned by the Columbia Museum of art to create work in commemoration of the 150th anniversary of the burning of Columbia, and most recently named one of eight Emerging Photographers of the South by Blue Spiral 1 Gallery in Asheville, North Carolina.