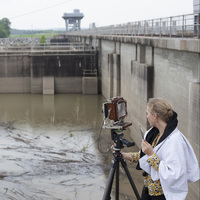 Lily Brooks was born in Massachusetts in 1981. She received a BFA from the Massachusetts College of Art + Design in 2006 and an MFA from the University of Texas at Austin in 2014. Lily was the 2013 recipient of a Powers Research Fellowship. Her work has been published in the Austin Chronicle and Cabinet magazine, and was recently exhibited in Forces at Work, a three-person show at the Visual Arts Center in Austin, Texas, and in a solo exhibition at Aviary, in Boston, MA in January, 2015. Lily is Instructor of Photography at Southeastern Louisiana University.