Glowing Wavelengths In Between

SPE exhibiting artist, Sonja Thomsen, discusses the beginnings of her project "Glowing Wavelengths In Between" and the ideologies that permiate her work and practice. Sonja writes... 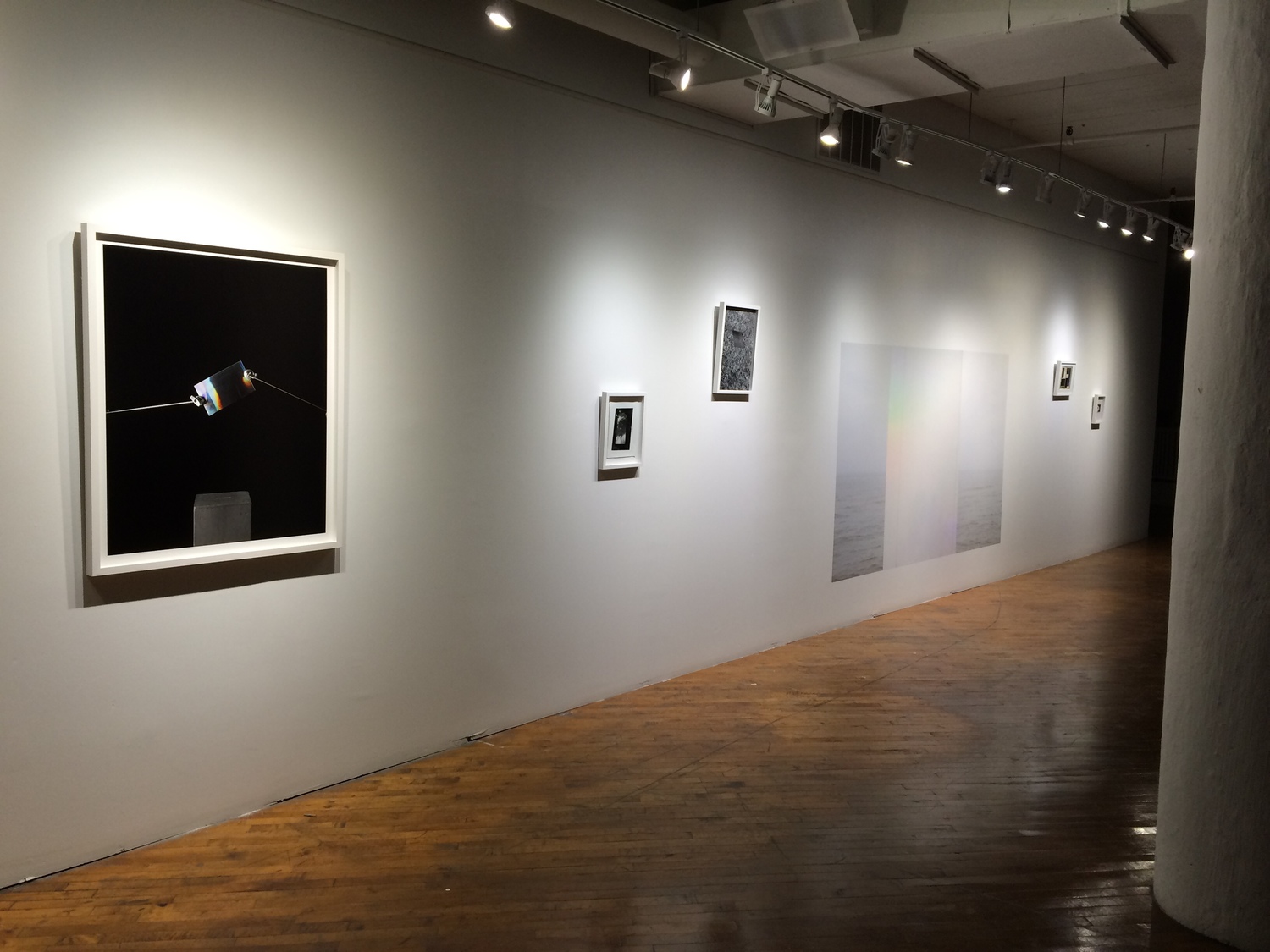 It was such a pleasure to put together the exhibition at SPE National – it felt sort of like a homecoming, since SPE was consequential to the beginnings of this work.

In 2013, I spoke during SPE’s 50th Annual National Conference in Chicago, IL. That lecture led to a series of conversations that landed me an invitation to the Digital Artist in Residence at Columbia College, and ultimately awarded me the space to experiment and develop the work that is now on exhibit at SPE’s National Office in Cleveland, Ohio. I think of it as an incubator of sorts. The work has become an evolving collection of photographs, reflective materials, and faceted sculptures that engage our perception of light and wonder. This collection is titled “Glowing Wavelengths In Between.”

The work choreographs how one moves through the space, reflecting, and refracting around image and form, light, and illusion. I am interested in exploring knowledge creation in the spaces between seemingly opposing kinds of concepts: weight/lightness, micro/macro, fleeting/fixed, part/whole, mind/body, and self/other. 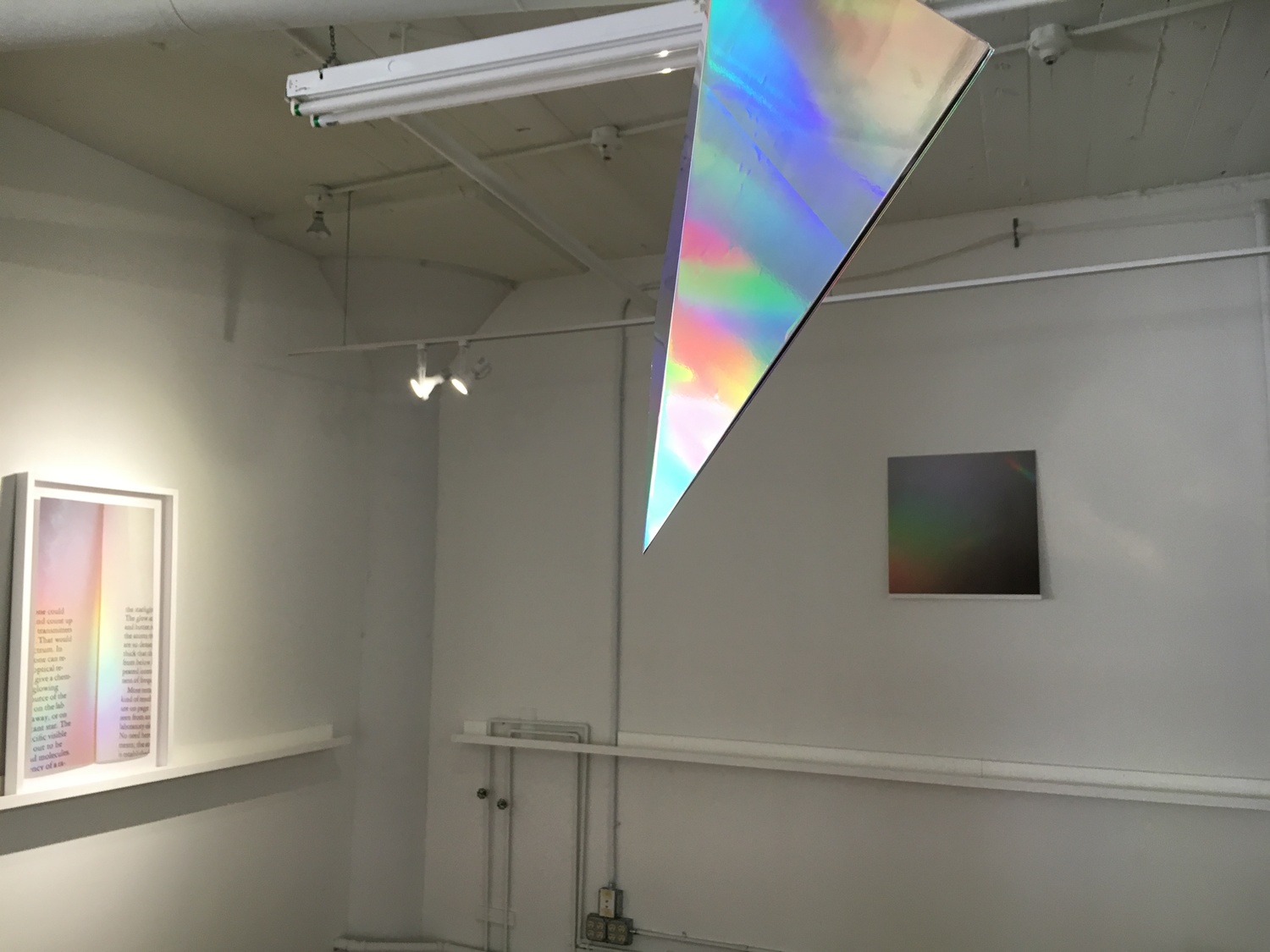 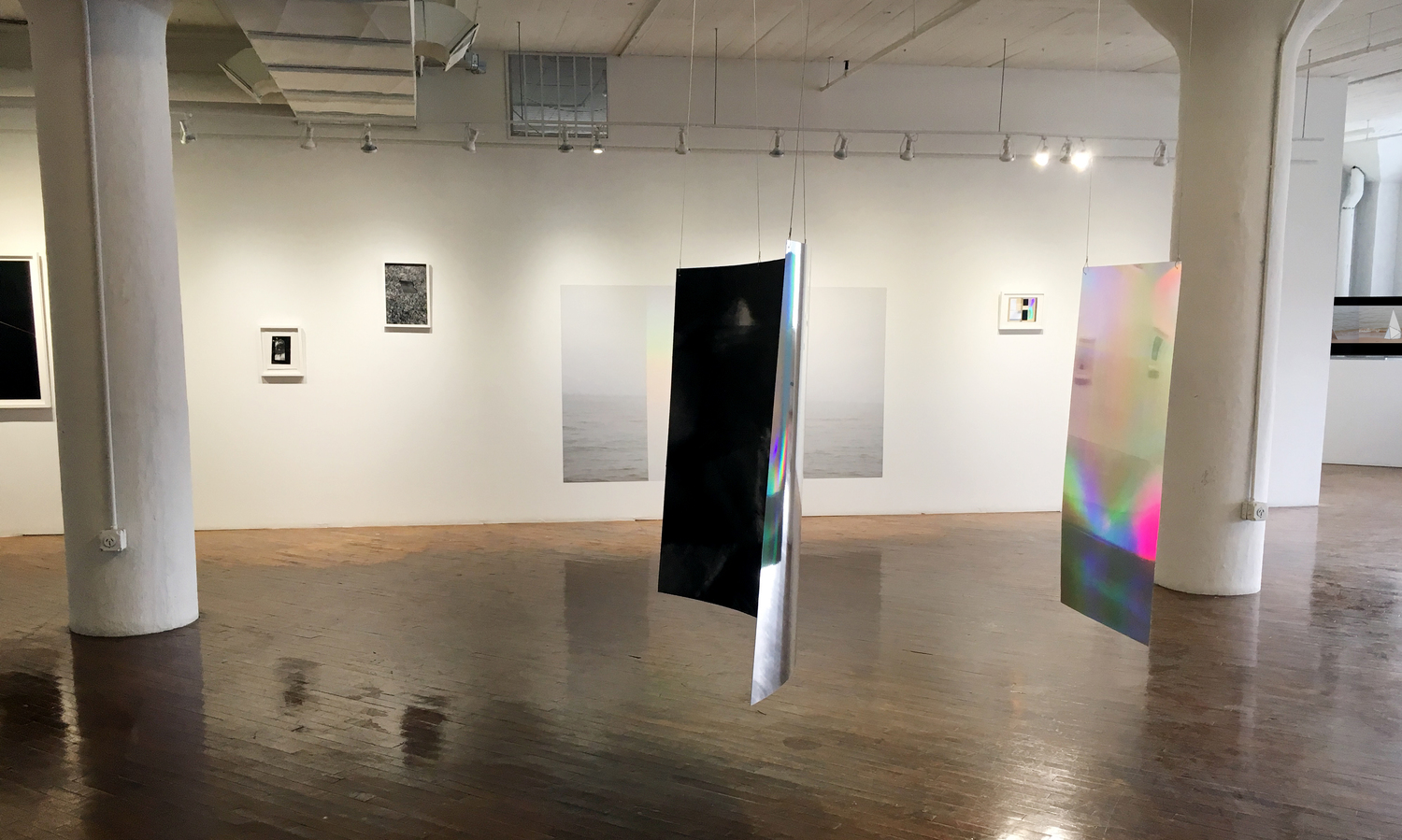 I wanted to use the exhibition “Your White Light,” at SPE’s National Office, as an opportunity to focus on the prismatic, the rectangular, and the rhombus. The installation fixes and manipulates one’s experience of light itself. There are three areas in the gallery, and within each space the installation is structured around mirroring the photographic space within the architectural space. I sought to implicate the viewer with the title, pointing to the individuality of our perceptions. I am interested in this visual and visceral experience constructing an embodied knowledge. 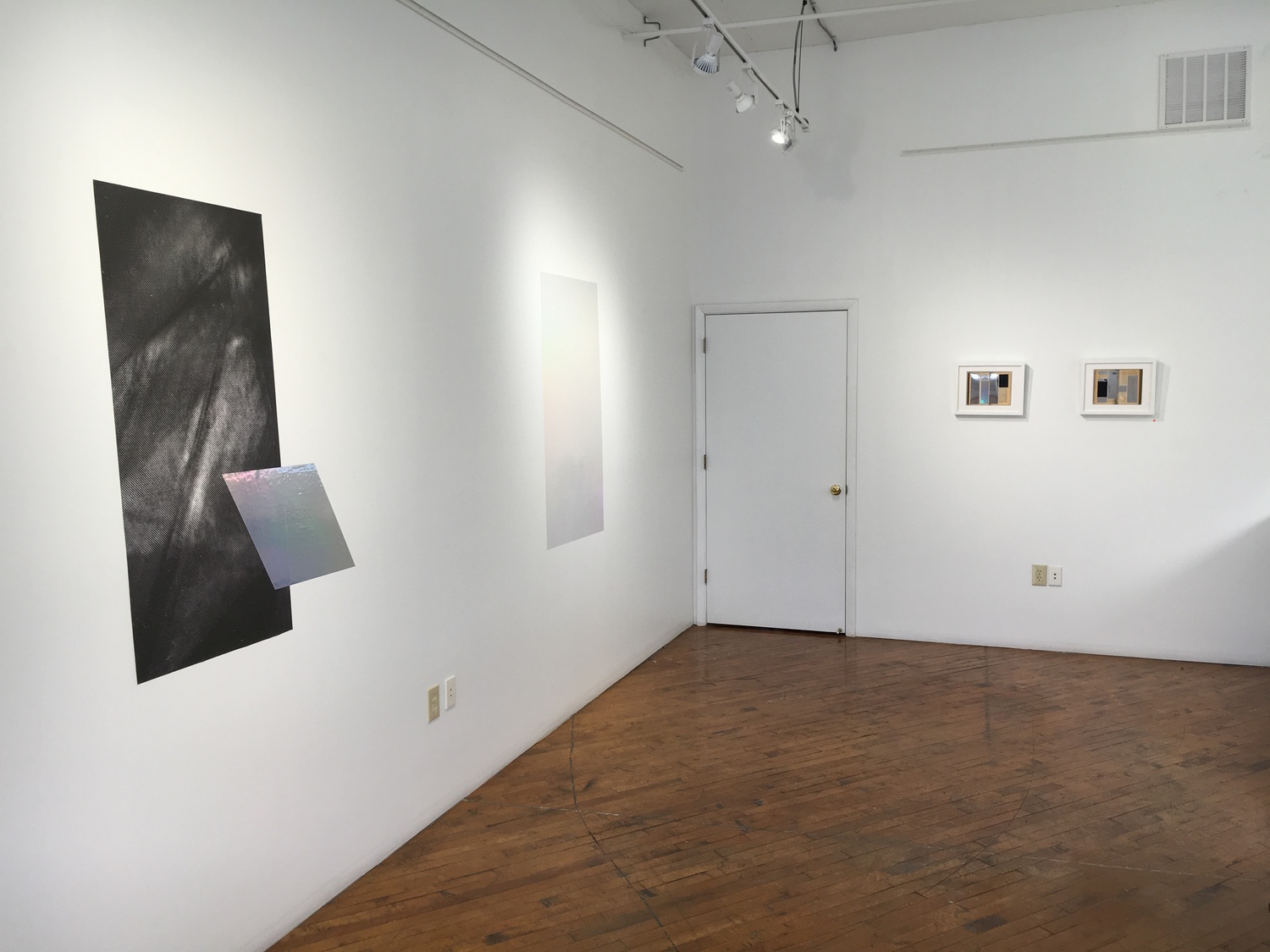 I have been thinking recently about a conversation I heard with artist Ann Hamilton, for two reasons. One, she talks comprehensively about embodied knowledge in her practice. I value the knowledge manifested in the body as well as the mind. This has me recalling Moholy Nagy’s Vision in Motion, “to learn to see and feel in relationship.” This simultaneous comprehension is something I seek to embrace. Secondly, Hamilton frames her making, her teaching, and her mothering as one united practice. I am modeling that way of thinking in my own practice – to see things as a part of a collective whole rather than at odds with one another. My time in the studio, with my students, or with my children, all feed my research on wonder and perception, and allow me to create from a place of curiosity, discovery, and delight. 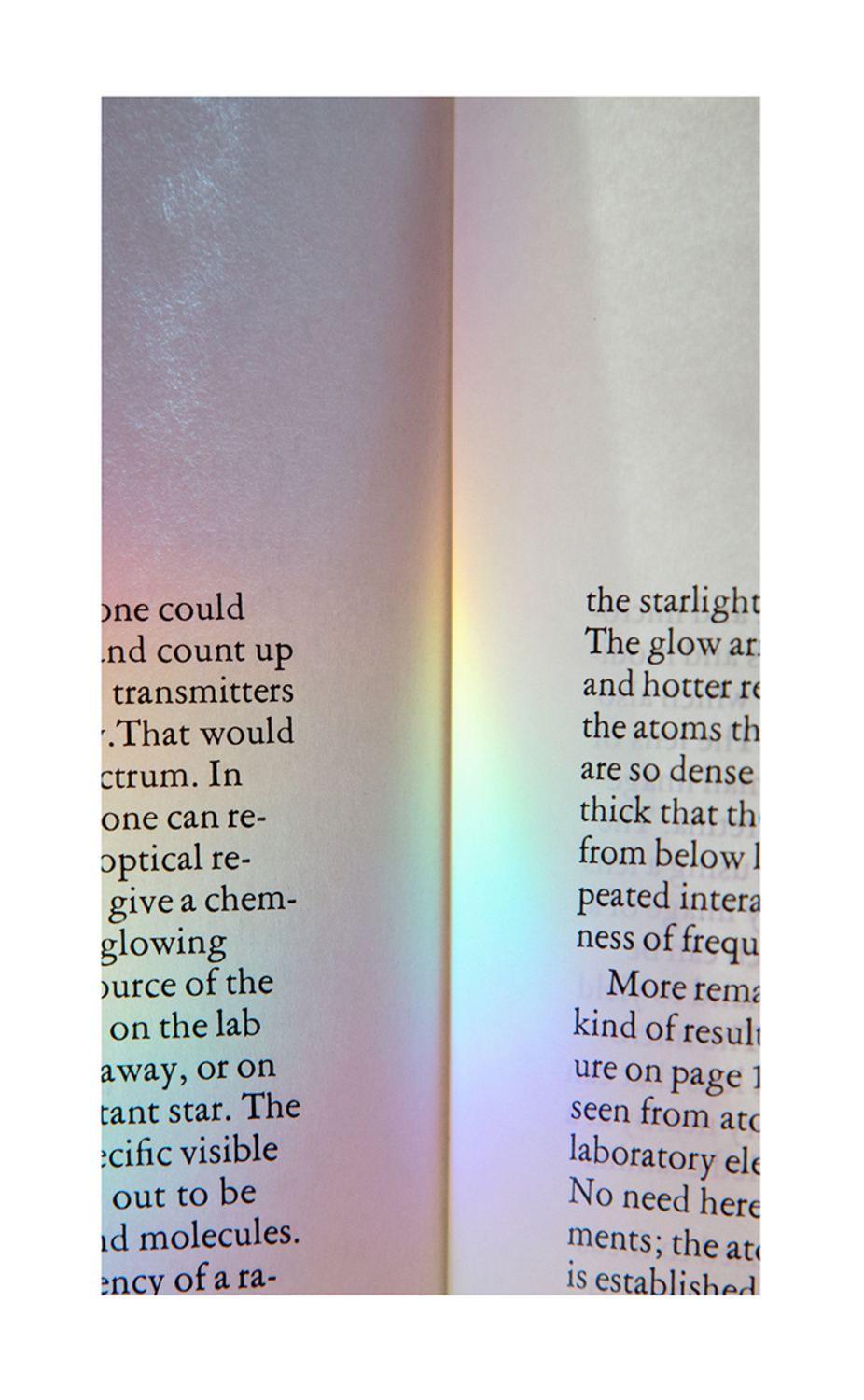 One of the earlier pieces in the show, “power of ten,” pictures a folded image of the epilogue (titled Reading the Rainbow) from the book The Powers of Ten and the Relative Size of Things in the Universe by Charles and Ray Eames. I think of this photograph and its found poem as an artist statement of sorts. Here, in the Eames work, design, art, science, and family merge. I am interested in the intersections of these axes and what happens when they fold in on themselves. I am grateful for the space to improvise in the gallery and that SPE National allowed me to unfold some of these ideas.

Sonja Thomsen is an SPE member and Milwaukee-based artist. Starting her career as a student of science, Thomsen later earned an MFA in photography at the San Francisco Art Institute (2004). She has exhibited with Higher Pictures, DePaul Art Museum, Center for Photography at Woodstock, the Reykjavik Museum of Photography, New Mexico Museum of Art, Madison Museum of Contemporary Art, Galerie f5.6 in Munich, among others. Sonja Thomsen is a member of the international photography collective Piece of Cake – POC, the co-director of The Pitch Project, and is a Lecturer at the School of the Art Institute of Chicago.

We’re excited to launch the 2021 Exposure Editions fundraiser! From Osamu James Nakagawa’s celebrated series “Remains,” this meditative image will benefit SPE, the artist, and Asian Americans Advancing Justice (@advancingjustice_aajc). Link in bio to see all prints in the sale. All prints are $100 in a limited edition of 30. 🖼: Osamu...

We’re excited to launch the 2021 Exposure Editions fundraiser! This beautiful limited edition print is from Kelli Connell & Natalie Krick’s new collaborative project and it will benefit SPE, the artists, and Global Fund for Women (@globalfundwomen). Link in bio to see all prints in the sale. All prints are $100...