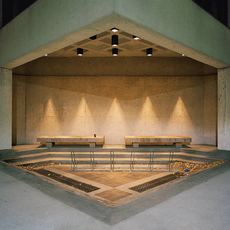 During the 1950's the U.S. Government was hard at work building top-secret facilities for many purposes relating to the Cold War. Initially, the facilities were designed to defend against bomber attacks. As technology progressed the government built massive bunkers designed to survive nuclear attacks, silos for intercontinental ballistic missiles, and a national communications network to activate the military in the case of a nuclear attack.

Over the past four years I have photographed many of the Nike missile defense sites in the Chicago area, the former Congressional continuity of government bunker in West Virginia, a bunker in Massachusetts that would have been used to coordinate missile strikes during World War III, and missile sites in the Great Plains, Arizona, and New York. All the sites that I visit allow some sort of tour; most function as museums and are regularly open to the public.

My intention in these photographs is to show the tremendous government preparedness for an attack, the secretive construction hidden in plain sight, and the function as tourists' entertainment today.