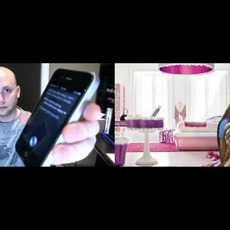 Siri. Your Wish is its Command.

Siri is an iPhone application that is marketed as a personal assistant. The ad copy on Apple's website reads, "Siri. Your wish is its command." Apple presents Siri as simply a companionable, genderless aid; however, the name and voice of the software happen to be female.

Some male consumers react with aggression when interacting with Siri. Online, there are numerous examples of men posting videos of themselves speaking to Siri as if she is a submissive sexual slave. Siri has a variety of pre-programmed answers, which allow her to demurely respond to the harassment.nnIn this piece, found Youtube footage of men insulting and trying to sexually intimidate their phones, exists alongside staged shots of a woman unsuccessfully attempting to forge a female friendship with hers.

Siri. Your Wish is its Command