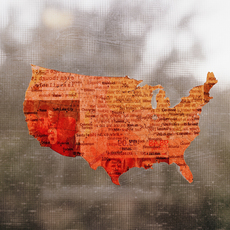 We Have to Count the Clouds

An inscription at the National Weather Service station in New Braunfels, TX reads, "He who shall predict the weather, if he does it conscientiously and with inclination, will have no quiet life any more." We strive to understand it, perhaps to control it, as a means of survival.

From the gothic-looking tower that is Blue Hill Meteorological Observatory, one can see seventy miles in any direction-from Mount Washington to the Boston Harbor Islands- and, in between, the city's skyline. It is the oldest continuously operating weather station in North America; data has been collected there every day since 1885, and its walls host an amalgam of meteorological technologies. Together, these instruments act as an extension of our senses. They serve as a guise of control; in them a semblance of understanding exists.

These pictures are about the desire to know and see and predict what we cannot, what is wily, shifting, beyond our command. They are about the marks and instruments that conjure our history and future-the translation of wind that looks like a polygraph test or heart rate monitor, the sunlight burned into paper, the rain gauge cut like a crown, the handwritten notation of the first frost. With my camera, I study these devices and places with equal curiosity. They are abstracted, isolated, transformed in form and purpose. I am also looking closely at other marks made by the weather- those on the landscape (wildfire, erosion) and even on our own bodies (goosebumps, sunburns), which act as another kind of indicator or evidence of mitigation.

I arrived in Texas in August of 2011, during the worst drought since the 1950's. Conversations about the heat were ubiquitous and as tedious as the temperature itself. On the hottest day of the year, I painstakingly cut out the weather map from the Wall Street Journal. It was 112 outside the window of my apartment, where I stuck the map with saliva to be photographed. Backlit, the delicate shape of the country was all pinks and reds, collapsed by my camera upon its verso, then the window, screen, and landscape.

For me, the picture spoke about displacement, history, and the near obsolescence of printed matter. I considered the newspaper weather map, this outline of the country filled with cartoon symbols, as a kind of tarot card. Buried amid the record of what had happened in the preceding 24- hours, the map was a published prediction of what might come next. I thought about all that data-now rendered by little suns and the scalloped edges of cold fronts-and wondered where it came from.